21 Interesting Facts about Taj Mahal, you never knew before

The most iconic monument of India, The Taj Mahal is a spectacular show of man made marvel. Many interesting Taj Mahal facts and myths have surfaced over the years. India’s most iconic mausoleum, inspired by love, has awed millions of visitors with its serene beauty. A UNESCO World Heritage Site, the Taj Mahal is shrouded in myth and there have been many legends which have cropped up over the years. Here are interesting facts about this world famous monument:

Fact #1: Sick with grief, Shah Jahan was first inspired to build the Taj Mahal after Mumtaz Mahal, his third wife, died while giving birth to their 14th child. His wife was in labor for 30 hours before she died at age 40.

Fact #2: The four minarets (towers) surrounding the Taj Mahal were constructed farther away from the main structure than usual. This was done as a safety measure so that if any of them fell, they would fall away from the tomb rather than crash into the place.

Fact #3: During British rule in India, the garden landscaping was changed to look more like the manicured lawns in London, England. The original garden was adorned with lots of roses and daffodils

Fact #4: A Taj-inspired luxury hotel and shopping complex is under construction in Dubai. The Taj Arabia, as the replica is called, will be four times the size of the original and will cost an estimated US $1 billion.

Fact #6: With construction beginning around 1632 and finishing in 1653, the Taj Mahal took an estimated 22 years to build.

Fact #7: Ustad Ahmad Lahauri, generally regarded as the chief architect of the Taj Mahal, was not Indian; he was a Persian from Iran. 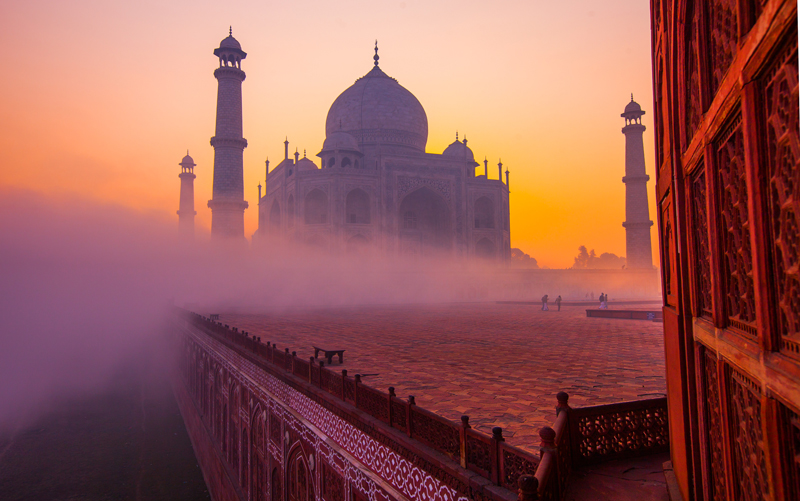 Fact #8: Islamic tradition forbids the decoration of graves, so Shah Jahan and his wife are actually buried in a plain crypt beneath the main inner chamber of the Taj Mahal.

Fact #9: Shah Jahan’s other wives and even his favorite servant are buried in mausoleums just outside of the Taj Mahal.

Fact #10: Construction of the Taj Mahal cost an estimated 32 million Indian rupees (the equivalent of over US $1 billion at the time).

Fact #11: The structure on the western side of the Taj Mahal is thought to have been used as a guest house.

Fact #12: Over 1,000 elephants were used to transport heavy materials and supplies for construction.

Fact #13: A total of 28 types of precious and semiprecious jewels are set in the marble. The turquoise came from Tibet, and jade came from China. Heavy white marble — the principal building material — was transported from Rajasthan.

Fact #14: British soldiers pried precious stones from the walls of the Taj Mahal during the Sepoy Rebellion in 1857.

Fact #15: An estimated 20,000 laborers were recruited from all over Asia to contribute to the massive project.

Fact #17: False structures and scaffolding were constructed around the Taj Mahal throughout different conflicts to confuse German, Japanese, and Pakistani bomber pilots.

Fact #18: The Taj Mahal’s white marble is rapidly turning yellow because of terrible air pollution in Agra. Only electric vehicles are allowed near the structure, and a 4,000-square-mile environmental radius was declared around the monument to help control emissions.

Fact #19: The Taj Mahal is actually cracking at an alarming rate due to lack of groundwater beneath the structure. Wooden foundations — once submerged — are thought to be rotting. Even the minarets are beginning to lean.

Fact #20: The Taj Mahal was declared one of the New Seven Wonders of the World in 2007, receiving over 100 million votes. Voting for the Taj Mahal actually helped push the controversial internet-and-phone-based poll to elect new wonders into the world spotlight.

Fact #21: In 2008, a Bangladeshi filmmaker constructed a replica of the Taj Mahal at a cost of US $56 million dollars so that his impoverished countrymen in Bangladesh could enjoy the famous monument without traveling to India. The replication took five years to complete with modern equipment.

How to reach Taj Mahal, Agra