Trekking in Manali: Guide for 7 Best Treks Near Manali

Manali has been known as a popular holiday destination in India among the leisure travellers to feel the chill of the himalayan mountains. It has turned into all season destination where travellers flock for a getaway from the dusty city life. However, it is not just the honeymoon destination, Manali does have the Himachal’s adventurous treks for the trekkers that make the heart go – Thump. Thump. Thump.

Trekking in Manali invites people from all over the world to rush to this place. Out of the many adventure sports in Manali, trekking in Manali is the most sought adventure. You will come across wonderful combinations of nature mixed with rough territories, thick backwoods and high meadows offering joyful perspectives of the Kullu Valley and the Himalayan foothills. Manali abounds with routes that tread rocky terrains, dense forests and alpine meadows offering ecstatic views of the Kullu Valley and the Himalayan foothills. All this set up this lovely town as a perfect launch pad for treks and attracts trekking enthusiasts from all over the world. Every adventure must witness the most adventurous treks near Manali.

travel d’globe brings you 7 such treks in Manali that would spark a trekker’s fire in your heart! The Hampta Pass trek is the most popular trek near Manali, it takes you from one campsite to another from a walk through the village culture of Banjara to the beautiful meadows and tantalizing ambience of Lama Dugh to paradise in the shadows of the Deo Tibba Mountain at its very base – this trek is a Camper’s paradise.

The rocky trails and narrow valleys of the Hampta Pass (4297m) when adorned with the hues of snow are sure to give you that Artic region feel along with close up views of the Himalayan foothills, the Indrasan peaks. You’d also be lead to the plain sand grounds of Balu ka Ghera (3627m) and the cold sheaths of Shea Goru in this 5 day moderate level blizzard of awe and amazement. Bhrigu Lake Trek short and moderate trek from Gulaba, near Manali to the immaculate surroundings of the Bhrigu Lake is adorned with beauty that of a paradise. It begins with a drive from Manali to the bustling tunes of Gulaba and thereon a walk to the solitary confines in camps at the serene Bhrigu Lake (4270m) bestowing a panoramic view of the Kullu valley.

On your way down, visit the temples, hot water springs, the old-world architecture of Vashisht Village and don’t forget to capture all those moments on film! The village with so many historical stories that are linked to Alexander the Great’s men and an alternatively  to Akbar as well. Malana village is linked to legends and history, albeit hidden and tucked away at an altitude of 2652 metres in the Kullu Valley.

A trekking bliss that begins 21 kms from Manali, passing through Naggar and carrying a bit of Himachal’s history with Roerich art Gallery, Nicholas Roerich Art Museum. This moderate trek takes you to the picturesque Rumsu (2300 m) accompanied by forests of oak and pines, trailing through meadows of wild flowers to Nauya Tapru, below the Chanderkhani Pass(3600m).

Once over the Chanderkhani Pass  – it’s a slow show of captivation with the snow-capped Dhauladhar ranges and the Hanuman Tibba before you begin your descent to the reclusive village, the social structure, the strict customs and religious beliefs of Malana.

Preferred Time to trek: May to November 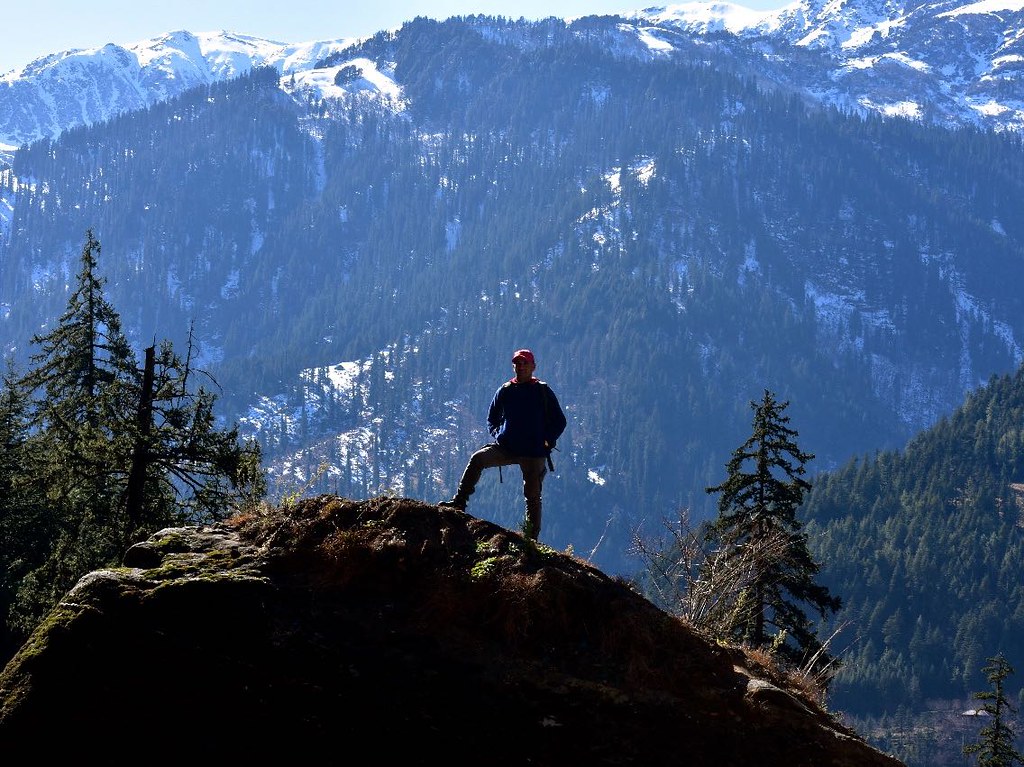 This trek brings the adventure of trekking in Manali in January and other winter months for the snow lovers. The snowy peaks and hill stations of Himachal Pradesh lure tourists from far and wide. This Northern Indian state is known for its breathtaking beauty, vast green valleys, and meandering rivers. The town of Manali, nestled near the northern end of the Kullu Valley, is the jewel of Himachal Pradesh. Just a few kilometers away lies Lamadugh, a charming alpine plateau.

The one day trek in Manali  Lama Dugh Snow Trek, can also be combine with Jogni Waterfall trek. The Jogni waterfall trek route is a pleasant uphill walk towards the Vashisht Village, its temple and revitalizing hot water springs leads you to Jogini that greets with its cascading song of sacred waters and a pool formed below to take a dip and feel like heaven. Beas Kund (3690 m) is where the sacred river Beas originates. Beas Kund trek encompasses all that you’d look out for a easy-normal trekking experience – suitable for all age-groups, camping by the river, trekking through meadows and forests, panoramic views of the mountain ranges such as the Pir Panjal range, the Dhauladhar range and trails following the banks of the river Beas.

This trek begins with a drive from Manali to the skiing slopes and adventurous spirits of the Solang Valley to the alpine meadows of the scenic Dhundi, through birch trees at Bhoj Patra only to feel lost like a crazy heart in the divine embraces of the Beas Kund. A relatively easy trek with a moderate climb, Chandrakhani Pass (3660m) is another gem in the majestic crown of the Kullu Valley. Beginning at Naggar, it leads you deep into the pine, chestnut and deodar trees guarded trails of Rumsu to the alpine meadows to Naya Tapru (below Chandrakhani).

The scenic onslaughts of alpine forests and meadows is a treat for any nature lover and with the spectacular views over the Chandrakhani Pass of the Pir Panjal and Parvati mountain ranges, this trek is sure to be etched in one’s memory and photographs forever. From the Pass, there’s a descent to the secluded Malana Village before you head for Jari that will lead you back to the heartbreak kid – Manali. Witness nature’s bare beauty and indulge in thrills as you take on the journey from Kullu valley to Dharamshala. Nestled amidst the lush green backcountry of the Western Himalayas, this trekking trail is for those looking for an offbeat yet challenging trek experience.

The 11-day trek journey takes you over the Kalihani and Thamsar passes, offering splendid views of the Pir Panjal, Bara Bhangal and Dhauladhar ranges. The trek culminates in Kangra Valley; from thereon you can get a ride to Bir or even paraglide, if you are still craving more thrills.